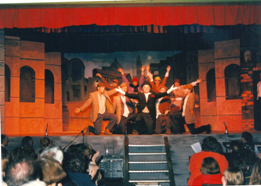 Castlemagner is a village at the eastern end of Duhallow. It is a growing community where the village contains a school, pub and a shop. The national school is in the townland of Ballyhass while there is also a childcare facility beside the school. Castlemagner is steeped in history with the remains of Castlemagner Castle and Lohort Castle still to be seen today. One of the deadliest battles of the English Civil War took place in the townland of Knocknanuss in the Castlemagner Parish, where it was said that around 4500 people were killed. Today a memorial marks the Battle of Knocknanuss in Castlemagner.

Castlemagner is an active community where there are a number of clubs and organisations present. The Castlemagner Musical Society is a very successful one, which has between 130 and 140 members between front and back stage. The society has performed in the Opera House in Cork in the past.

Sport plays a big role in the community with a very successful local GAA club. Sally’s Cross Road Bowling Club is renowned nationally. In 2009 the club hosted the All Ireland Road Bowling Championships where thousands of people attended.