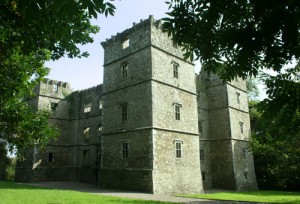 Kanturk (‘The biggest town, in the biggest barony, in the biggest county, in the biggest province in Ireland’) is a thriving market town nestled on the banks of the confluence of two rivers, the Allow River and Dalua River. Having originally been established as a market outlet by the then Earl of Egmont, Kanturk now with a population of 2000 serves the commercial and market needs of a rich agricultural hinterland and has all the modern conveniences and amenities of most towns in Ireland. Kanturk town has something for everybody making it an excellent place to live and visit and is easily accessible from all major cities in the Munster Region.

It is situated about 50km from Cork City and Limerick City, and lies just north off the main N72 road, 15km from Mallow and about 40km from Killarney. Mainline rail is less than ten minutes away in Banteer, and airports at Cork, Kerry and Shannon are within easy reach. Services in the town include supermarkets, two national schools, two secondary schools, numerous public houses, restaurants, three public riverside parks and shops galore, to name but a few. With a creamery situated in the town centre, the dairy industry is well served with numerous stores and facilities. There are shops for all tastes with a strong presence of boutiques for the lady shoppers. The town has a central layout with all shops within an easy walking distance from each other.

The town’s name is derived from the Irish ‘Ceann Tuirc’ (Boar’s Head) and local legend claims that the last wild boar in Ireland was slain there. Kanturk has a rich and diverse history influenced by both the Gaelic and Planter heritage. Kanturk could be known as a fortressed area as it was here the great Irish Clan – the McCarthys – stood their ground against the onslaught of Norman forces in the 13th Century. The McCarthys, having been driven from the southern reaches of Co. Kilkenny and Tipperary, finally set up a stronghold in Kanturk to retain what is still referred to as ‘good country’.

Kanturk Castle was originally acquired by the Society for the Preservation of Ancient Buildings in Ireland Committee in the 1880’s, the freehold was then donated to the National Trust UK in 1900 when it became the seventh property of that trust and the first large house to be owned by them. In 1951 it was given up by the National Trust UK on a 1000 year lease to the fledging An Taisce along with £500 towards its upkeep. Since then extensive restoration and stabilisation has been carried out and the surrounding land has been purchased by An Taisce. The freehold was passed to An Taisce in 2000 following a special act of the British Parliment. Prior to 1601 the Blackwater Valley, where Kanturk is located, had grown rich on exporting wool and provisions and had a thriving import economy based on wine. Kanturk was built by the McCarthy dynasty whose thousand year old lineage had provided the Kings of Munster and who were powerful Gaelic princes. Kanturk was a highly fashionable building, clearly linking Ireland with the latest thinking in architecture in Britain and the continent.

The castle is one of the largest fortified houses in Ireland, but it was never completed or lived in. In 1618 all work was ceased on order of the Privy Council in Britain who were uneasy about such a large castle being in the hands of a Gaelic prince. As it was never roofed, it was not seen as a threat and burned as many similar properties were after the Battle of Kinsale. And this together with the later preservation of the site has meant that it provides an almost unique and complete insight into the minds and aspirations of Ireland’s Gaelic princes before their flight. The building combines traditional Irish Tower house architecture with Tudor and even Renaissance features. It is four stories high, with four corner towers raised to five stories. Most of the structural limestone was quarried on the site, but the fine worked limestone around the windows and fireplaces would have been from elsewhere. Surrounding the castle is a mixed grove of Irish and English oaks planted to commemorate the operation of the two National Trusts.

Having been at the wrong side of Elizabethan Wars and Civil/Cromwellian Wars, Kanturk’s population was severely disrupted and infused with a strong contingent of Anglo Irish Settlers. This is still a strong feature of the town. Originally established as a market town by Percival, the Earl of Egmont, the town’s streets still bear the names and architecture is noticeably Georgian style.

Kanturk’s three public riverside parks – developed by local voluntary effort – are examples of its many amenities. It has strong social networks with many voluntary groups contributing to life in the town. For example, it has a long-established Community Council along with a Chamber of Commerce.

Bordering the renowned Sliabh Luachra region, traditional Irish music is a strong feature of the town and hinterland. For example the famous musician Jackie Daly hails from Kanturk. The last Irish Boar was hunted down and killed in Kanturk many years ago and this is celebrated in an annual Wild Boar Festival. The town is also a strong supporter of the arts and hosts an annual arts festival in March. Entertainment is provided on an ongoing basis with numerous events being held in the Edel Quinn Hall throughout the year and its cinema boasts of 3 screens.

Kanturk is a very successful sporting town. Duhallow Hunt Club is one of the oldest hunts in the world (Est. 1745) having two meetings every year where they ride through the town. Kanturk also hosts a point to point meeting each year. There is also a strong gaming/angling tradition in Kanturk. The Munster Blackwater is just south of Kanturk and its two tributaries running through Kanturk have good stocks of fish. The Kanturk and District Trout Anglers is a vibrant club that maintains these local rivers. Kanturk Gun Club has a very active membership with a good supply of game in the surrounding countryside. Field sports are also very strong in Kanturk. Kanturk has a thriving rugby, gaa, soccer and golf club providing a healthy social outlet for the town’s youth and elderly alike. There is a strong tradition of cycling in the area and the town boasts a banked cycling track – the only one outside of Dublin.