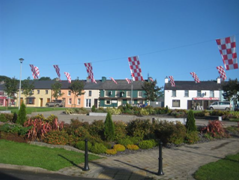 Knocknagree(Cnoc na Graí – Hill of the hare) is located towards the east of Duhallow, approximately 5 miles north of Rathmore. It is located on the R582, Ballydesmond to Rathmore road.

Knocknagree is an active community where people are welcoming and helpful to each other. Many new organisations are being set up by a lot of people who are willing to get involved and help each other out. In 2004-2005 the village undertook a major renewal of the fairfield/village green area.

The Knocknagree National School was first built in 1840. The new school was built in 1962. The school is still in use and will celebrate 50 years in 2012. The school has several famous past pupils including:

–  Ned Buckley the famous Irish poet was born in 1880, he owned a grocery shop in the village and attended Knocknagree National School. – Eoin Rua O’Suilleabhan, another famous Irish poet was born in 1748 and died in 1784, there is a plaque erected in his memory outside the church.
– Dan O’Connell was the first man to introduce live music and dance to a public house. He was born in 1921 and he owned a public house with his wife Hannah Mai O’Connell. He died in 2009 at the age of 87.
– Pat Byrne, former Garda Commissioner was originally from Knocknagree. He retired in 2004.

– Fairfield in Knocknagree is particularly nice at Christmas with a beautiful Christmas Tree and lights. During the year, it is wonderfully maintained.
– Knocknagree GAA pitch plays host to games in the darker evenings and allows training to continue during late Autumn and early Spring due to its excellent floodlights.
– The local Church has been recently renovated and it is a beautiful church for the village to be proud of.
– There is a plaque erected to the memory of Eoin Rua O’Suilleabhan, a famous Irish poet, outside the church.