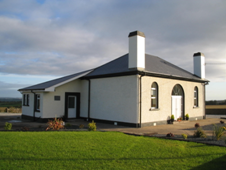 Laharn is an active community situated at the foot of Baelic Mountain in the east of the Duhallow region. Laharn Cross is the location famous for people gathering every Sunday night throughout the summer months to enjoy traditional music. People, both young and old are invited to dance the evening away on the specially erected wooden platform. Waltzes, quicksteps, foxtrots, not to mention polkas, shoe the donkey and the Siege of Ennis are the order of the evening for the hundreds of enthusiastic dancers who gather for two hours (8-10pm).

Laharn Community Action LTD is looking forward to celebrating its 12th year resuming on Sunday 30th May 2010 and continuing for a full 15 weeks finishing up on the 5th of September 2010. John Paul O’Shea, Vice Chairman of Laharn Community Action Group LTD said “the tradition of crossroads dancing is alive and well here at Laharn Cross and it is marvellous  to see both young and old taking part. We are celebrating 12 years in existence this year and we are looking forward to a great summer of entertainment. Everyone is invited; the fun is free, though we ask people to contribute a few euros in the donation boxes which go towards the cost of the live bands”.

Dont be feared about the wet summer evenings – it’s onl a stones throw to the newly refurbished Laharn Heritage Centre where dancing can continue which is located about one kilometre away from Laharn Cross. Mike, Helen & Southern Pride kick off proceedings this coming Sunday. Bands appearing at Laharn Cross for the month of June are:

The schoolhouse remained closed until 2004 when Laharn Community Action LTD purchased the old schoolhouse from the Department of Education and set about refurbishing it into a new Community, Cultural and Heritage Centre. Officially opened in May 2006, the centre caters for both young and old in the area and is available to people in the locality and surrounding areas. Activities currently ongoing in the centre include monthly traditional nights and a wide variety of courses such as art, step dancing, tai chi and yoga. The centre is also used as an alternative venue for the cross roads dancing when the weather isn’t favourable.