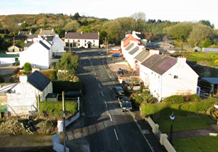 Meelin is a small rural community in North West Cork, with only one village between it and Kerry to the west while actually bounding Limerick to the North. It has a population of approximately 600 people. Meelin is a community with it’s own special history. It sits just below the renowned Meelin Hill, looking across Duhallow to the south and Rockchapel to the west.

The story of Meelin goes back into pre history. The name itself is woven from Celtic Mythology and many legends have evolved about it. Stone age implements have been found in the locality in caves and by streams.

The name Meelin – “Maoileann” means a round bare hill in modern language. In earlier times it was called Moylan and was so marked in the old maps. In our youth we were told that the name came from a daughter of the McAuliffe Chieftain in Castle McAuliffe, situated one mile southwest of Newmarket town on the bank of the River Dalua. Her name was Moylin also called “Meelan”. She was being forced into marriage against her will so she fled to Meelin and was helped by the people. When her father sent his soldiers to capture her, she flew from Moylins Rock on Meelin Hill to the Blessed Well in Ballinatona and disappeared. This bears out the other stories connected with this maiden and gives credence to the theory that Moylin was a pagan goddess whom folklore connected with the McAuliffe clan.

The book “Meelin Through The Years” was written and published in 2001 by a small but very hard working committee. This is an invaluable resource, not just the people of Meelin, but for the Duhallow/Clár region.

– Meelin GAA Club are the most successful Hurling Club in Duhallow, with a total of 16 titles over the years. The period from the eighties to 1996 was a golden era for hurling in the area, with a derth of talent assisting with the capture of several titles. After an absence of 13 years, the John Joe Brosnan Cup was brought back to Meelin Village in 2009. This marked a most significant home coming, as this was the first time the trophy was held aloft by a victorious Meelin Team. The cup was originally presented by the Meelin Club in 2004 to the Duhallow Board to commemorate a man from Meelin who has often been described as “Mr. Duhallow GAA”. Meelin GAA grounds are recognised as being the best sod in Duhallow. The area has a very strong Juvenile GAA Club called St. Peters and St. Marks. This caters for all juveniles from Junior Infants in school to under 16 in both football and hurling.

– Meelin Gym is a large hall with full gym equipment which was built in the early 1990s. This is an invaluable resource which can be booked for physical training sessions by teams or individuals and is ideal for birthday parties. It is run by Denis McAuliffe (087 6981762).

Meelin is Irelands Highest Village. It sits below the famed Meelin Hill, which rises above Duhallow with a height of over 310 metres above sea level. The village square measures 235 metres high, while the highest point of the village is the Community Hall, at 251 metres high. Meelin GAA Grounds may also very well be Irelands highest pitch, set beside Terra Cross, at 300 metres high.

The starting point of Meelin Walk is Meelin Village square and while standing there by the village pump it is possible to visualise the busy place it was towards the end of the 19th century when there were four stone yards in the village, many other businesses and a far bigger population. Proceed up the hill towards the church and you leave on your right the QUARRY SITE where OIL DRILLING took place in 1963, the LIME KILN dated 1860 A.D. which is now several feet below the road level due to the fact that the road was raised several times over the years. The PAROCHIAL HOUSE built in 1875-1880 and the PARISH CHURCH of ST. JOSEPH built in 1837 are fine examples of limestone work and evidence of the availability of limestone in the area. Standing high in the background is MEELIN HILL, where in January 1921 the firing squad was located when the ambush of British Military lorries took place. Turn left down towards Ballinatona, and on your right at the corner is the famous LAND LEAGUE house. Further down on the left, a plaque marks the spot where the village FORGE stood for over 40 years, operated by Neily Fitzpatrick. He not only shod horses but repaired all kinds of items for the locals, cut hair and provided a great place for meetings, chat and local affairs. Further along there are limestone rocks and the site of the last QUARRY, which was worked up to the end of World War II. Take a rest for a while at the bridge over the RIVER DALUA. At the next junction turn right along the Line Road passing the site of the BLESSED WELL which now supplies water to the whole of Duhallow.

Turning right at the next cross you will pass the STANDING STONES near Pat Mahony’s farmyard. On reaching the main road again, to the left is MEENKERAGH HOUSE, home of the late MADGE BARRY (nee McCartie) who played an important part in helping Countess Markieviez during her visit to Newmarket in 1920. Continuing back towards the village you will pass the site of an old FORGE, which was operated by Thade Murphy and later by his son Jerh. Jerh liked to play the bagpipes and his tunes could be heard in the evening time after his days work. This house is now owned by the Buckley family.

Finally, we come to the last remaining monumental stonework’s which is operated by Dan Collins and further along the road is the site of the old school beside the Community Hall. This was replaced by a new school across the road in 1950. Back again to the village square and a refreshing drink in Quinlan’s bar or Murphy’s Bar.

In the year just gone by,
Who oft times its said
Since the quarrymen left us, old Meelin is dead
And the prophet said grass would grow around our hall doors
The place we call Meelin will be Meelin no more
The times are now changed
And the future looks bright
So come to Meelin and have a good night,
Forget all your worries, try and live till you die
Where old Meelin hill rises up to the sky.