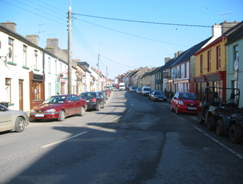 Newmarket is nestled in a beautiful pastoral setting situated north west of Kanturk bordering counties Kerry and Limerick. Founded in the 17th century, Newmarket is historically known as Áth Trasna and originated as a market town in the barony of Duhallow.

The famous orator and lawyer John Philpott Curran was born in Newmarket. Beautiful sculptures can be found about people associated with the town, that of Sarah Curran, youngest daughter of John Philpott Curran and Robert Emmet’s great love. That of the wonderful writer Alice Taylor, famous for her book of memoirs, School Through The Fields. This was followed by many other best selling novels. The lovely four seasons statuettes signifying as the name suggests “The Seasons”. The McAuliffes have a very strong family clan and a bronze monument marks the west end of the town.
The famous Aldworth family home stands monumentally overlooking the town, this building known as the James O’Keeffe now houses several enterprises including IRD Duhallow. The Island Wood in Newmarket is a beautiful visitor park which is the base for setting off a number of beautiful walking trails. The Island Wood or Coill an Oileann is named after a townland of the same name. This name may have its origins in the fact that the townland of Island lies between the River Dalua and one of its tributaries the Rampart Stream. The wood was originally part of the Manor of Newmarket, which was owned by the Aldworth Family. The Twelve Apostles tree can be found in the wood, its name arising from the fact that twelve trunks extend out from it’s main trunk.