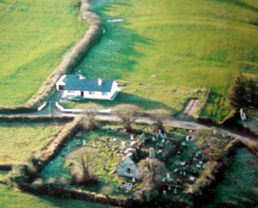 Tullylease is situated in the North Eastern corner of Duhallow. It is approximately 11 miles from Newmarket and 12 miles from Kanturk. It is on the border of Cork and Limerick and on the border it boasts majestic views of five counties of Munster namely Cork, Kerry, Limerick, Tipperary and Clare. Tullylease is a rural community with 430 people, it has a school and a pub and it also has a beautiful church. It is part of the Parish of Milford/Freemount/Tullylease.

The name Tullylease(Tullach Léis) means “Hill of the Huts”. In 644 St Beirechert came to Tullylease from the Synod of Whitby and founded the Monastery, the ruins of which survive today. Around the Monastery there rose a great seat of learning, many trades were learned and many scholars came from near and far. As there was no accomodation, these scholars built huts after clearing forestry and flattening grass and thus the name “The Hill of the Huts”. The death of St. Beirechert was recorded in the Annals of the Four Masters which showed his importance and the high esteem he was held.

The feast of St. Beirechert is celebrated anually on the 18th of February, known as St. Bens Day or the Well Day. It brings visitors from far and near. Mass is celebrated in St. Beirechert’s Church and then the ’rounds’ are done, which consists of visits to the local Holy Wells for prayers. In the field adjoining St. Beirechert’s National School is the ‘Deer Stone’ or ‘Cloch na hEilte’ which is supposed to have a cure for headaches. Legend goes that every day there was milk in the stone for workers. They were puzzled as to where the milk was coming from so one day they decided to keep watch, while they were watching a deer came and was leaving milk in the hole, she saw the people and got angry, she kicked the stone and left her foot print (the deer stone), but she never again left milk there.

There are two holy wells in Tullylease, one is St Ben’s Well and the other is St Mary’s Well. St Mary’s well is in the townland of Poulavere anglicised from ‘Poll a Mhéar’ (the Hole of the Finger), one of the legends of how this townland got its name is the Well was originally a baptistery, but when Cromwell came it was granted to one of the Roundheads. The Well was lined with oak planks and sheeted with lead. The Cromwellian decided to steal the lead from the well to sell it and when he put his hand in his fingers fell off.